For seventeen years, we have been relentlessly supporting farmers in the frontline defending their lands from the aggression of settlers and Israeli soldiers through the ‘You Are not Alone’ Campaign. It is a campaign of collective voluntary work actions aimed at supporting Palestinian farmers during the olive harvest season.

Starting from October 9th until October 24th, the Palestinian Grassroots  Anti-Apartheid Wall Campaign, in addition to the Palestinian Farmers Union, the Palestine Youth Forum, the Palestinian Culture and  Enlightenment Center, Jadayel Association for Culture and Arts, the Cultural Forum Center-Beit Anan, and the Al’awda Center have all organized voluntary days to harvest olive trees in the villages of Deir Istya, Yanoun, Izbet Shufa, Aqraba, Jayyous, Beddo, Izna, and Senjel. The targeted villages encounter a fierce attack by the Israeli occupation to confiscate the lands of the Palestinian inhabitants for illegal settlement expansion.

'You Are not Alone' in Deir Istya, Friday 9th.

The collective efforts of olive trees picking will be followed by another action of strengthening the rootedness of Palestinians in their lands amid the uprooting attempts of Israeli apartheid: the plantation of olive trees in various parts of Occupied West Bank.

Israeli Aggression: An invisible wall between Palestinians and their land

On last Saturday, the volunteers of the ‘You Are not Alone Campaign’ went to Yanoun, Nablus district to help the Palestinian farmer, Saleem and his family in picking their olive trees. Commenting on the importance of the support of the collective efforts of the volunteers, Saleem stated:

The Israeli settlers living in the neighboring settlement of Itamar, constantly attack us while harvesting our olive trees. Of course, their aggression is not limited to the olive trees harvest season. Armed settlers attack my house and farm regularly. I usually plant vegetables in the land surrounding our house to feed my children; yet, the settlers made sure not to leave even this for us as they have recently come to my farm to graze their livestock. By the support of the volunteers, we will be able to finish picking our olive trees faster before the settlers destroy them. 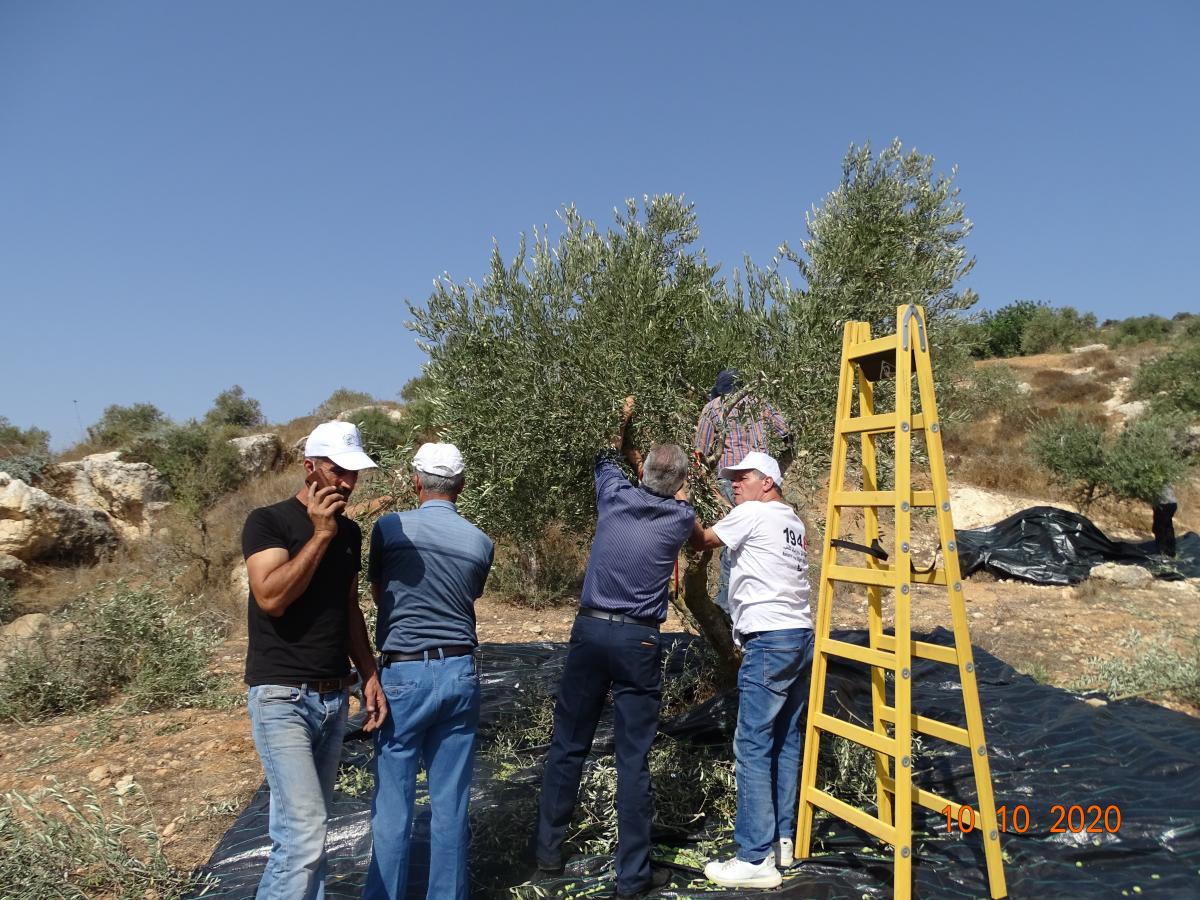 Few days before the beginning of the olive harvest the attacks of fanatic Israeli settlers on olive groves belonging to Palestinians have notoriously increased. On September 19, Israeli settlers escorted by armed Israeli soldiers uprooted around 200 olive, fig, and lemon trees in Khallet Hassan area in Bidya town, Salfit district. Israel plans to confiscate the hilly area of Khallet Hassan but residents and activists have organized several demonstrations and resisted the  attacks of armed settlers and Israeli soldiers while trying to protect the area. 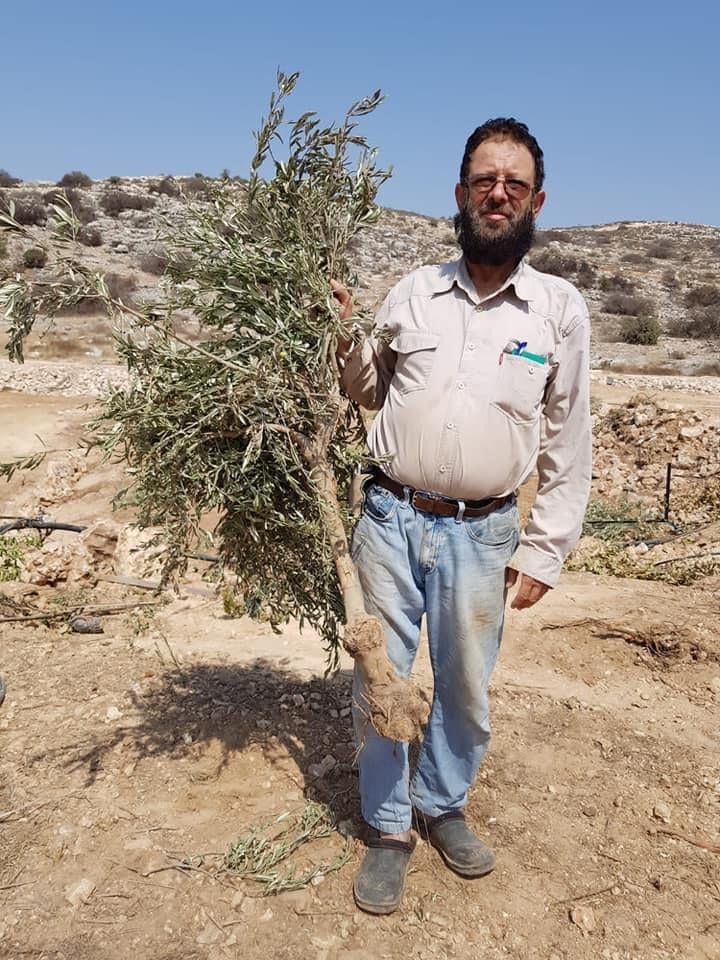 A Palestinian farmer holding his uprooted tree in Khallet Hassan. 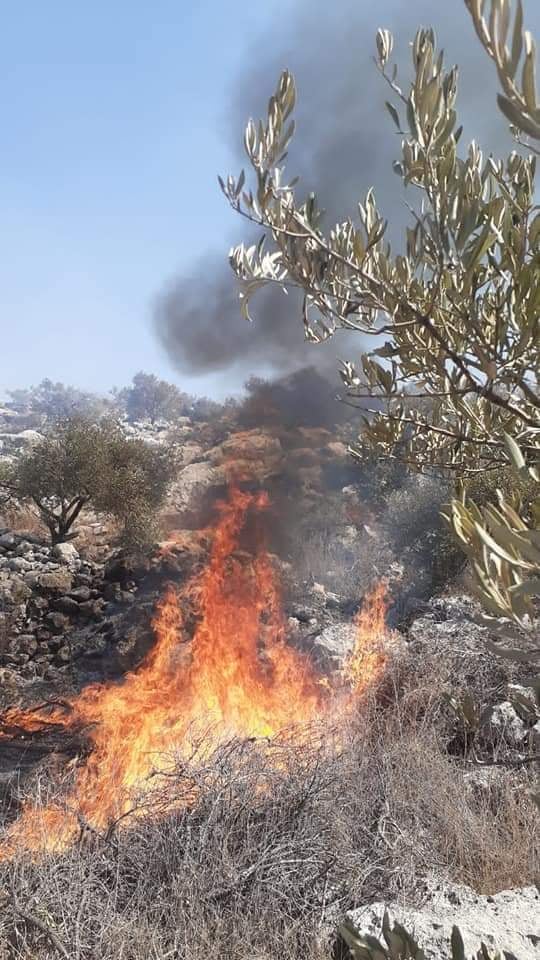 Through the intimidating violent practices of Israeli settlers and army, Israel’s regime of apartheid aims to create an invisible wall between Palestinians and their lands: a psychological wall of fear inside Palestinians.

About eighteen years ago when Israel started the construction of its 770Km apartheid wall, thousands of Palestinian farmers lost their lands and olive  groves as they became located behind the wall. To reach them during the harvest season, they need an Israeli permit, which is usually valid for a very limited amount of time that does not allow Palestinians to pick all of their trees and cultivate their lands.

Both the psychological wall of fear and the apartheid wall are a reflection of Israel’s settler colonial and racist regime that is built on and solidified more through a mentality of walls. Their various forms of walls that repress, humiliate, dehumanize and subjugate Palestinians are the means with which they aim to ensure the success of the bantustanization project, a colonial tool emulating other settler colonial regimes, such as the reservations caging the Indigenous people of Turtle Island to control the native ‘other’.

‘You Are not Alone’: Preserving Palestinians’ custom of O’nah.

Through the ‘You Are not Alone’ campaign, we seek to overcome the systematic Israeli fragmentation of our people via walls, checkpoints, bypass roads and roadblocks. The olive  harvest season is historically known for its communal aspect where extended family members, friends and neighbors come together to pick olive trees. The most salient phenomenon that emphasizes the communal values of Palestinians during this season is O’nah, translates to assistance or aid. Historically, O’nah implied that people who finish picking their olive trees early during the harvest season start helping their neighbors to harvest their trees. The ‘You Are not Alone’ campaign asserts and preserves these values of collaboration and communality from obliteration in the face of Israel’s settler colonial project distorting and repressing the cultural values and traditions of Palestinians.

These collective efforts of voluntary work conducted every year are also meant to support the steadfastness of Palestinian farmers in marginalized and threatened areas. By helping farmers and whole families to pick their olive trees despite the attacks of settlers and soldiers, the farmers can benefit from it economically. Olive oil is central to Palestinians’ sense of economic security. In the past and in the present olive oil has constituted an integral part of the Palestinian diet. A Palestinian home is stocked well when there is enough oil for the entire year until the next harvest season begins.