This campaign aims to promote people’s steadfastness on the ground as they are subjected to brutal attacks by illegal settlers and the Israeli army. The targeted villages are resisting a fierce assault by the apartheid Israel aimed at confiscating the lands of the Palestinian inhabitants for illegal settlement expansion. The campaign will provide assistance to Palestinian families to help them overcome obstacles and restrictions they face during the harvesting season.

The olive tree is not only a means of subsistence but a symbol of Palestinian steadfastness in their lands. Its roots are deeply entangled with  the ground on which the trees give its fruit. Despite the frequent attacks and systematic aggressions, olive trees in Palestine remain strong and green for generations, referring to the pride and dignity of the Palestinian people.

After the construction of the apartheid Wall, the Stop the Wall campaign launched the “You Are Not Alone” initiative in 2004 to enhance the steadfastness of the Palestinian people near the wall and the threatened areas. It covered 55 locations in the occupied West Bank at that time. The campaign continues throughout the years to stand up to Israel’s colonial project.

The existence of the volunteers and people on the ground will lead the occupation to the conclusion that those people are not alone, it will promote the idea of popular resistance and steadfastness.

Parts of these areas are located next to the bypass road as well as settlements and outposts. The Israeli occupation constructed these roads to promote its colonial apartheid policy to confiscate as many lands as possible and prevent Palestinians from accessing them.

On the other hand, Israeli settlers in these areas terrorize people, farmers, livestock breeders, and shepherds, assault them, steal their crops, ruin their trees,  and destroy residents’ priorities. Palestinian people are fighting against apartheid walls, humiliating checkpoints, raids, and bypass roads that devoured a large part of their lands.

Through these policies, the Israeli apartheid regime seeks to create an invisible wall between Palestinians and their lands, it wants them to feel the risk of being on the land in preparation to expel them by force to serve settlement expansion.

However, Palestinians are rooted in their lands challenging with their determination and steadfastness the Israeli apartheid plans.

This campaign also shows the interconnectedness of Palestinian social relationships, it depends on voluntary work and the willingness to offer help and assistance to people. The Idea of O’nah of Faza’a [ assistance in the harvest season] existed for decades in  Palestinian society, people were raised on helping each other. O’nah is a sign of social collaboration and community solidarity.

The campaign activities will be concluded in Masafer Yatta, to support people’s steadfastness there and highlight their struggle to live under the threat of demolition, land confiscation, and expulsion as well as settler and army aggression.

UN OCHA statistics indicated that violations increased by 40 and 50 % in the years of 2019 and 2020 respectively.  Between 2017 and 2020, 63 instances of settler violence in Masafer Yatta were documented. Nearly 500 assaults resulting in the murder of four Palestinians, 175 injuries, and severely damaged property were in 2021.

Stop the wall in cooperation with voluntary groups seek to defend Palestinians’ right to land as well as the right to exist, letting them know that they are not left alone to face the apartheid systematic plans. 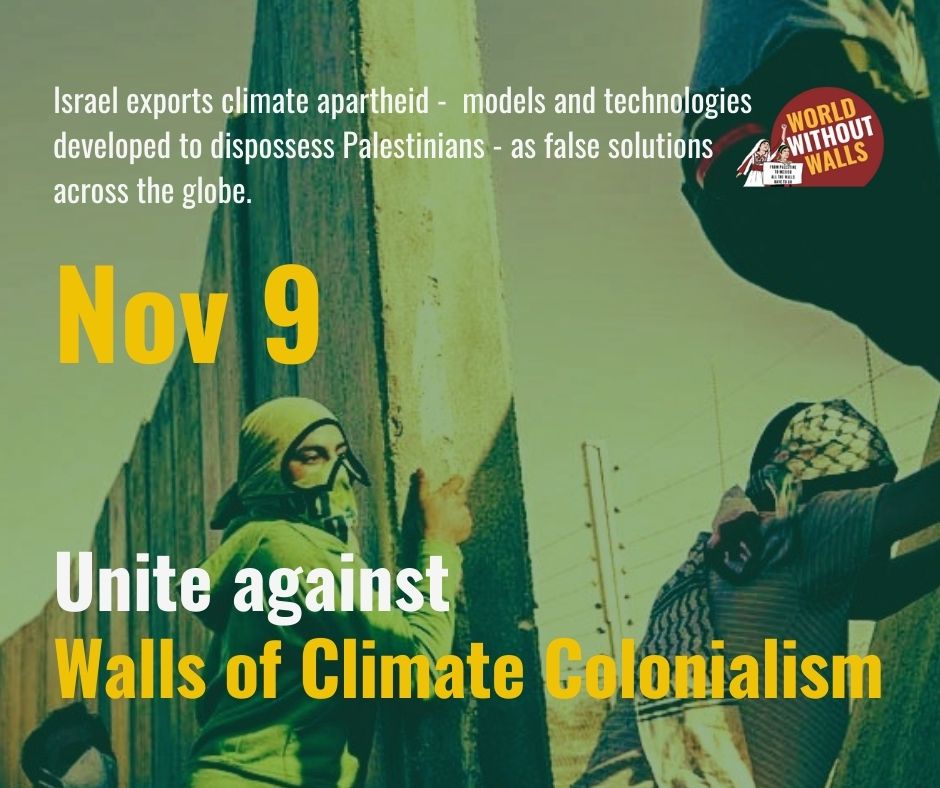 Unite against Walls of Climate Colonialism

November 9: Global Day of InterAction for a World without Walls  The 27th session of the conference of the parties (COP27) to the UNFCCC will take place in Sharm el-Sheikh, Egypt, from November 06-18 2022. Like previous conferences, the conference will start with a plethora of declarations and end with a dearth of action to […] 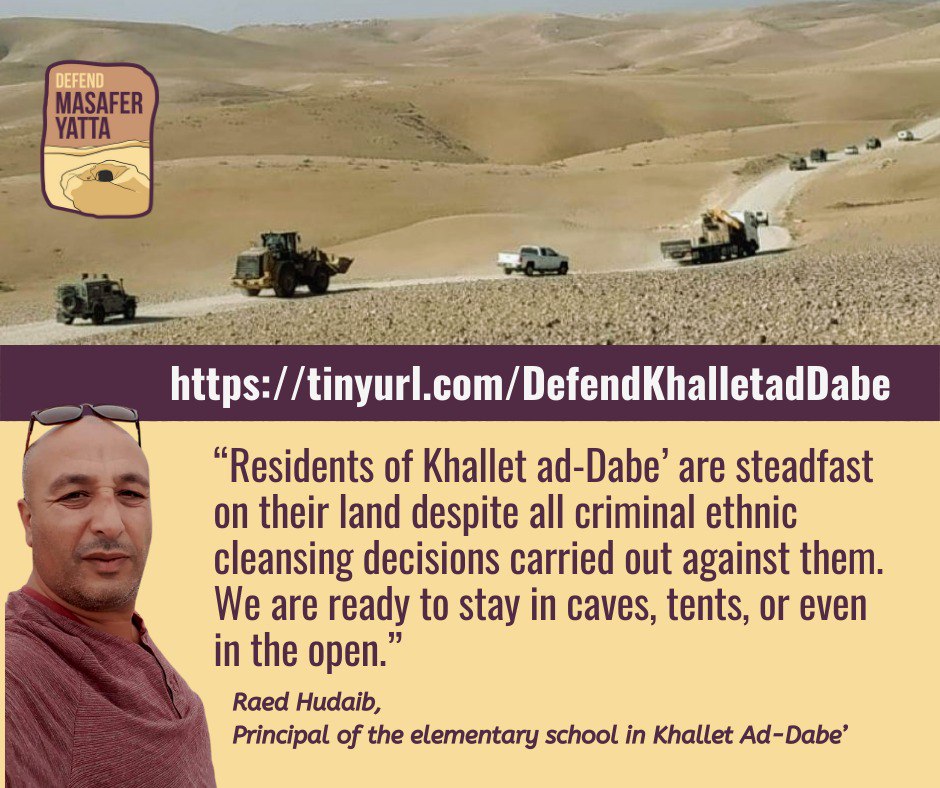 The verdict to ethnically cleanse Khallet Ad-Dabe’ came into effect on September 29. This means the demolition of the entire infrastructure and homes is about to happen at any time. Residents of Khallet Ad-Dabe’ are living in anxiety and fear of losing their homes. However, they are strong enough to face all illegal practices implemented […] 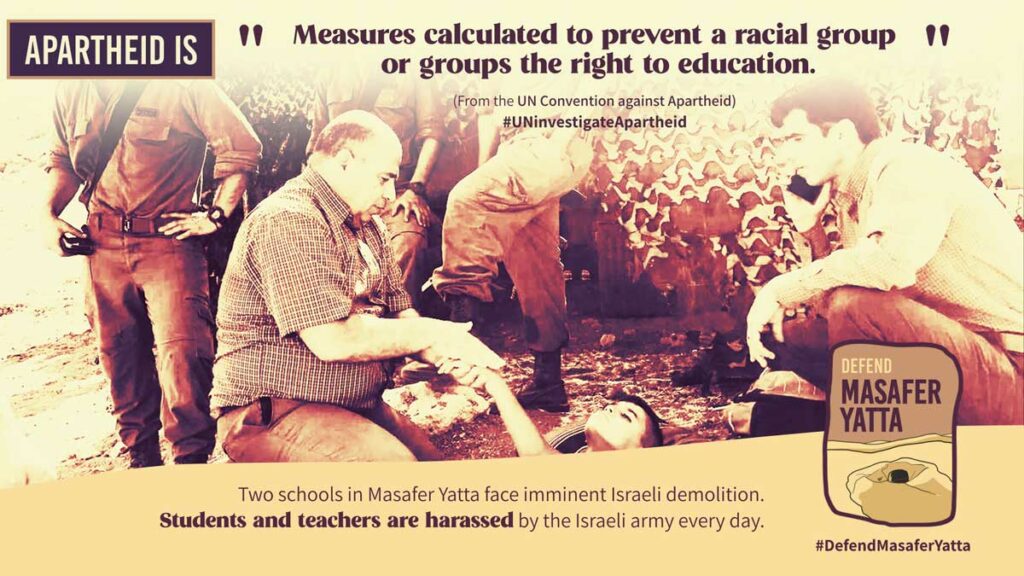 While the first day of school is a great day and a step towards new beginnings for students all over the world. It is the opposite in Masafer Yatta. Around 100 students in Al- Fakheet School and 50 students in Jinba school are under the threat of losing their right to education after the Israeli […]