Palestinians rallied today in front of the German consulate,  currently presiding the EU Council, to call on the EU to pressure the Israeli government to  immediately release  Mahmoud Nawajaa. Nawajaa is a human rights defender and the General Coordinator of the BDS National Committee (BNC). The detention of Mahmoud on July 30th is an unveiled onslaught on the BDS movement, the effort led by Palestinians to overcome Israeli apartheid in a global struggle against racism and oppression and for freedom, justice and equality.

Palestinians expressed their outrage at the EU’s complicity with Israeli apartheid as they once again turn a blind eye to Israeli violations of  basic human rights of the Palestinian people, including the right to freedom and expression and assembly, and its relentless attacks to halt the activities of human rights defenders like Nawajaa by arresting and intimidating them.

Over a hundred Palestinians rallied in front of the German Consulate in Ramallah today, August, 11th and called on the EU to mount pressure on the Israeli government to release Palestinian human rights defender Mahmoud Nawajaa. On Sunday, August, 9th, an Israeli military court extended the detention of Nawajaa by 8 days for the second time since his detention on July 30th. By extending the detention of Nawajaa, the Israeli government tramples on the calls of Amnesty International and many other organizations and movements across the globe to release Nawajaa. Until this moment, Israel’s internal security service (Shin Bet) has revealed no charges or evidence against Nawajaa. Mahmoud was allowed to see his lawyer only today, 13 days after his arrest.

In her speech during the rally, Ruba Elaian,  Nawajaa's wife asserted that:

Mahmoud is a human rights defender who always advocated for his people’s human rights. On July 30th, tens of Israeli soldiers escorted by dogs broke into our house. The soldiers handcuffed, blindfolded and took Mahmoud in front of his three children; the youngest one is only two years and a half old. I hope that this protest will lead the German government and the EU to exert pressure on the Israeli government to release Mahmoud; and I hope this message reaches Mahmoud to let him know that we are strong and our determination will never wane. 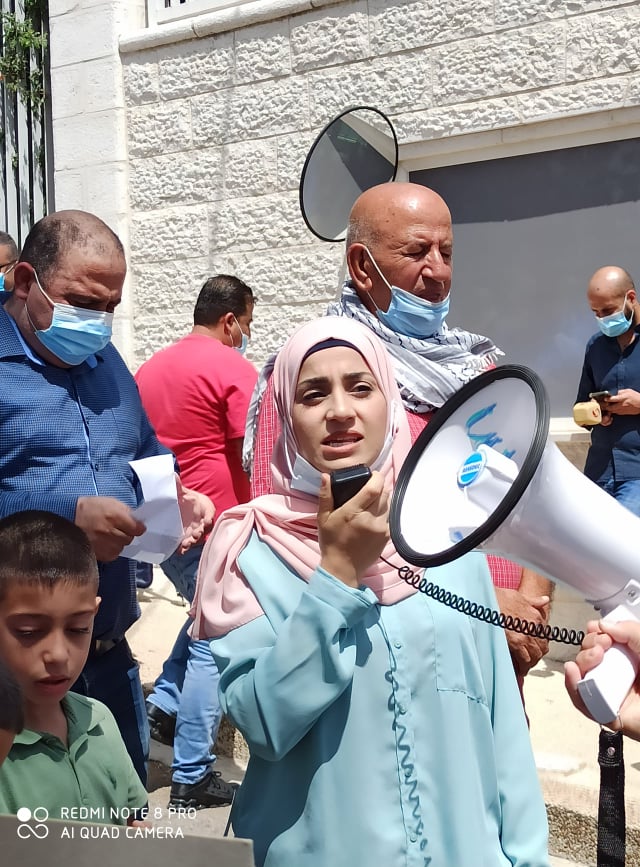 During the rally, the protesters stressed on the fact that the German government and the EU as a whole should go beyond empty statements of condemnation of Israel’s violations’ of Palestinian rights which amount to crimes against humanity. Khaled Mansour, a prominent Palestinian popular activist said that “we are here to send a message to the German government as it currently holds the rotating presidency of the EU Council to urge it to take actions and enforce counter-measures against Israel’s abuse of Palestinians’ human rights.” He added, “Enough is enough. The EU should act in favor of our just cause rather than staying silent while Israel commits more crimes against us.”

In his speech, Jamal Juma’, coordinator of the Stop the Wall Campaign, addressed the EU through the German Consulate stating:

We are gathering here in front of the German consulate to send a clear-cut message to the European Union. We say to them that keeping silent on the crimes of the Israeli occupation is not acceptable while the the EU always claims to be an advocate for democracy and human rights. The constant detention of more Palestinians and the ill-treatment of Palestinians in Israeli jails are one of the elements that define the crimes of apartheid committed by Israel. Mahmoud Nawajaa’ is one of these prisoners, one of those struggling for our freedom and birthright of self-determination.

The question of Palestine is at the moment facing Israeli attempts to liquidate it   and the EU has not yet taken any action to stop that. If the EU does not take action to disrupt such attempts, this means that it is complicit with Israeli apartheid.

The detention of Mahmoud Nawajaa is part of the efforts to liquidate our cause as it represents an onslaught on the BDS movement and to stifle any form of resistance to Israel’s escalated apartheid practices. The EU is also complicit in stifling our resistance through the BDS movement by its attempts to criminalize it and put an end to its actions and victories against Israeli apartheid.

But, I bring the good news to you today. Yesterday, in a meeting in the Israeli Knesset, Israeli representatives admitted the Israeli government’s failure and defeat in the the so-called ‘war’ they have been waging against the BDS movement. I am telling you today that the BDS movement represents the aspirations of the entire Palestinian people, one of the most important pillars of Palestinians’ resistance and the conscience of everyone around the world that rejects apartheid, discrimination and oppression. Any war waged against it, is a war against our basic human rights and aspirations to live in freedom and justice.