Since October 31, hundreds of people representing a large number of popular movements are on their way throughout Mexico in an International Caravan for the Unity of the People and against the Walls of Infamy, against Paramilitarism and the [Mexican] Educational Reform. The Caravan is yet another step in the people's struggle for a World without Walls, for freedom, justice and equality.

The Caravan for the Unity of the People and against the Walls of Infamy departed from the city of Oaxaca towards the border with the United States. Organised by the International Observatory for Human Rights of the People, the Caravan will stop in eight Mexican states and is being welcomed by community organisations in from across the country for public events and protests.

You can follow the Caravan through Puebla, Mexico City, Querétaro, Michoacán, Jalisco, Nayarit, Sinaloa and Sonora with pictures and videos (in Spanish) here: https://www.facebook.com/ObservatoriodeDDHHdelosPueblos/ 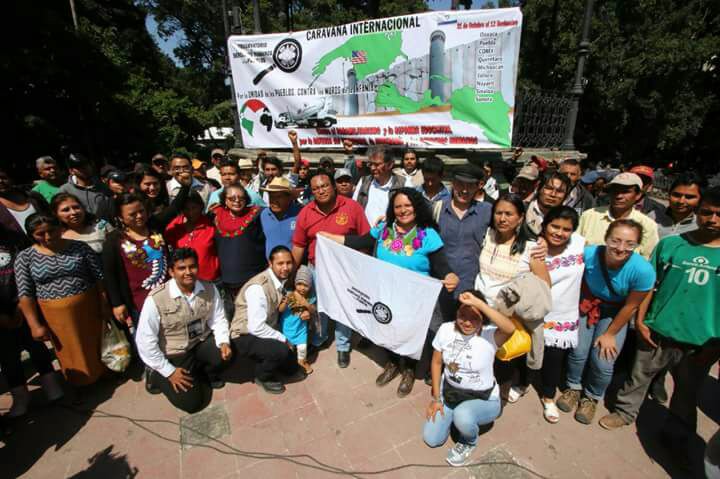 On November 10-12, the Caravan will culminate in a Border Encounter in Nogales, at the border with the US. It will bring together representatives from all over the world for an intercontinental dialogue will take place on the ground as well as through social networks and alternative media.

This caravan aims to give voice to the peoples of the Americas against policies of xenophobia, expulsion and discrimination against other communities, proclaimed by the Trump administration. At the same time, it is a manifestation of resistance to all the physical walls that are being imposed, such as Israel’s apartheid Wall against the Palestinian people, or political walls, including ever more racist and repressive migration policies.

Daniela González, international coordinator of the Observatory for Human Rights of the People, expalined that another crime the Caravan aims to denounce is the ‘war on drugs’ of the Mexican government and which “during the last ten years has killed more than 200 thousand people, caused 30 thousand disappearances and has displaced more than 280 thousand people.”

The Caravan is part of a series of initiatives for a #WorldwithoutWalls that include as well the Mexican-US delegation to Palestine for a World without Walls (October 10-15), various activities during the Global Week of Mobilisation to Stop Corporate Crimes and Impunity (October 23-27), the Border Encounter in Nogales (November 10-12) and the Global Day of Action for a #WorldwithoutWalls (November 9). 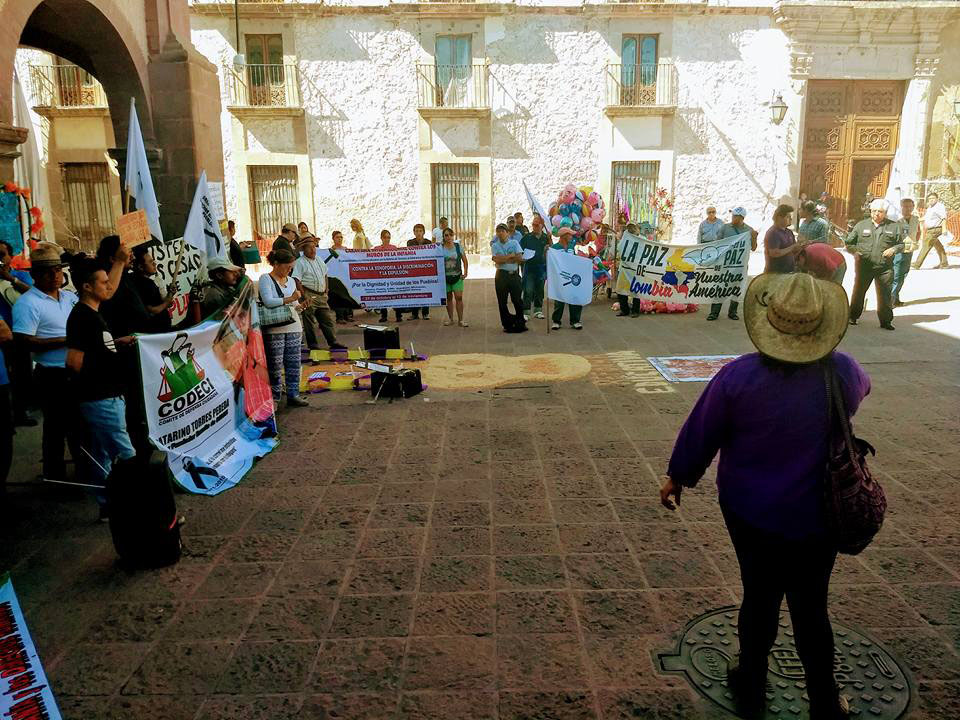 The Caravan started from Oaxaca, a state in the cross-hairs of corporate interests.

Since 2006, Oaxaca has been resisting not only poverty and earthquakes but also the practice of state terrorism, militarization of society and criminalization of protest.

On the morning of Sunday 19 June 2016, in broad daylight, Oaxaca was the target of an unconventional, asymmetric war operation by commanders of the Mexican state agencies, which left eleven civilians summarily executed and fifty wounded. This was the moment, when the citizen human rights monitoring effort by the Observatory began. They began networking with popular organizations and simultaneously promoting participatory democracy, the application of justice in the local, national and international levels, building and deepening resistance and rebellion and strengthening of popular power.

Due to its geographical location, Oaxaca is today a strategic territory for Mexico’s government projects. Based on the North American Free Trade Agreement (NAFTA) with the United States and Canada, it wants to install the Mesoamerican Initiative and the Plan Mérida, which benefits large transnational corporations and which, with the support of the World Bank and the International Monetary Fund, are designed to plunder natural wealth. 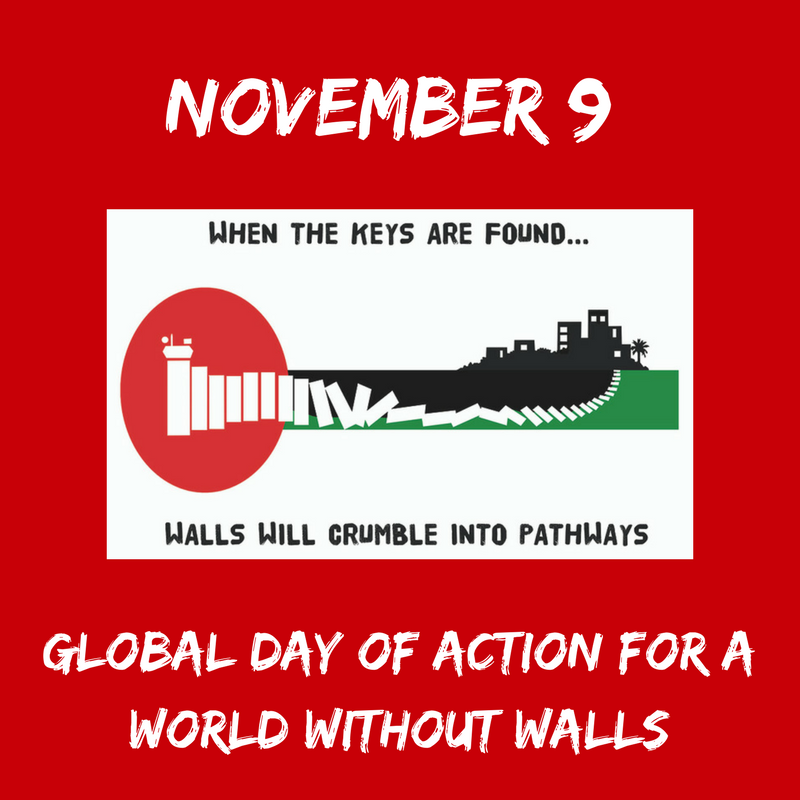 Stop the Wall statement for November 9: A global march for a World without Walls

November 9 has been launched as a Global Day of Action for a #WorldwithoutWalls by Palestinian and Mexican movements because we recognised each other in the shared injustice we are suffering and in our ongoing struggle to achieve justice, equality and dignity. This connection was only the start: the idea of #WorldwithoutWalls has inspired and […] 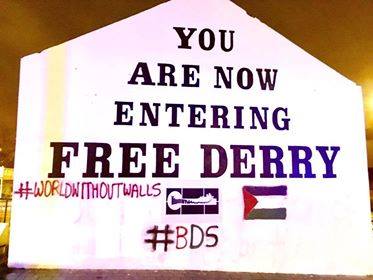 Here you find a list of some highlights among the global actions that during the days of the November 9 are building a #WorldwithoutWalls. Dozens of inspiring actions from north to south, from east to west have been planned: workshops, rallies, encounters, debates, exhibits, protests, video screenings and much more….    Canada For a World […] 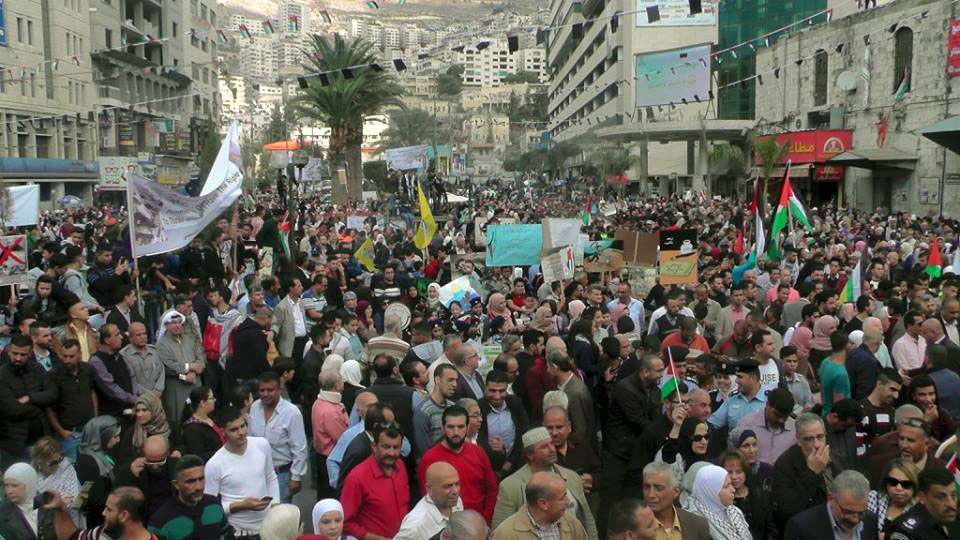 On November 2, at an invitation of the National Committee for the Commemoration of 100 year anniversary of Balfour Declaration, angry mass rallies were launched in all Palestinian cities and abroad, condemning the crime committed by Britain against our people when the then Foreign Secretary of Britain in a letter promised the Zionist movement a […]