The violent repression of demonstrations in Ramallah on Saturday 30th June and Sunday 1st July by Palestinian Authority police demonstrates the increasing unpopularity of the PA's commitment to negotiations and normalisation with the Israeli occupation. After 20 years of failed negotiations, it is impossible to explain the rationale of talks while Israel accelerates the ethnic cleansing of areas C and settlement construction matched with the destruction of Palestinian homes and revocation of residency rights in Jerusalem. Initially called by the network “Palestinians for Dignity”, the Saturday demonstration was to protest the decision of Mahmoud Abbas, the PA president, to invite the ex-Israeli “Defence” Minister and Chief-of-Staff of the Israeli Occupation Forces (IOF), Shaul Mofaz, to Ramallah. Given Mofaz's command of the IOF, and later the Israeli Ministry of “Defence” during the Second Intifada, he carries direct responsibility for numerous massacres and kidnappings, amongst the most notorious the use of bulldozers to destroy houses in Jenin refugee camp in 2003, killing the residents inside.

The PA postponed the meeting in the last minute due to intense pressure from youth movements, political parties, and from within the Fatah movement, and with this undercut once again a much wider mass mobilization against the occupation. Yet the youth protests went ahead as scheduled. The purpose was to underline the disgust that was felt within the Palestinian street about the initial invitation, particularly in light of the fact that Mofaz has had war crimes arrest warrants issued in other countries, yet is welcomed to Ramallah by the PA. The protests were to ensure that the PA would know clearly that any attempt to  reschedule the meeting, or to continue in the by-now-widely-accepted redundant “negotiations”, would indeed see mass mobilisations.

Saturday's demonstration was still large by the standards of Ramallah, with around one thousand participants. The steadfastness of the youth during those two days holding on to the simple demands of dignity and basic rights has earned them rightly the full respect of our streets. They have become the consciousness of our people.

The response to their actions by the PA echoed previous violent suppressions of protests by the PA in Ramallah during Operation Cast Lead in 2008/2009, when PA police and mukhabarat (plain-clothed, political police) used batons and (presumably Israeli or US-made) tear gas to attack the crowd. The repression of solidarity with Gaza was so well coordinated that the PA thoughtfully brought a unit of female police officers to beat the female protesters, thus not offending anyone's sensibilities.

The European Union and United States have been essential in the development of this PA “security” apparatus, with the United States, and specifically the CIA, taking responsibility for the training and organisation of the various intelligence services[1]. The European Union Police Mission in the Palestinian Territories (EUPOL COPPS) takes responsibility for training the police. Instances of torture in PA prisons is well documented,[2] abuses which EUPOL COPPS has directly contributed to through the training of prison officers in “riot control” techniques.[3] EUPOL COPPS, as stated on its website, is committed to “strengthening law and order”.[4] Given that Palestine is occupied by Israel, and that Palestinians are subject to Israeli military law, the application of logic would lead to a conclusion that EUPOL COPPS, and thus the PA “security” forces, may as well end up “strengthening [Israeli military] law and [the unjust] order” of the occupation.

A note of historical interest is that the former head of the EUPOL COPPS mission to the PA, between January 2009 and January 2010, was a Mr Paul Robert Kernaghan, a former Chief Inspector with the Royal Ulster Constabulary (RUC), the notorious paramilitary, Protestant- dominated police force that enforce(d/s) British colonial rule in the North of Ireland. Mr Kernaghan achieved a relatively high-rank in the RUC between 1978 until 1991. The RUC regularly colluded with loyalist death squads in the sectarian murder of Catholic civilians, and violently suppressed demonstrations with live and rubber-coated steel ammunition.[5] The rubber-coated “baton rounds” alone were responsible for the deaths of seventeen civilians, eight of them children.[6] That such a man should be appointed to lead the EU mission speaks volumes about the priorities of the development of the PA “security” apparatus, with the emphasis clearly on suppression of dissent.

Such suppression of dissent was seen on Saturday and Sunday. The use of tactics similar to those experienced by the Arab Spring – undercover mukhabarat using metal chains and batons to beat unarmed protesters, attacks on journalists, beatings of women and young people, kidnapping protesters from the street and beating them in regime police stations – is a sign that any veneer of respectability and legitimacy that the PA has worked hard to attain, is falling apart. The PA batons on Saturday and Sunday not only cracked the skulls and bones of Palestinians, but most importantly were another blow to the image of the PA security forces and its commanders.

The police force is a central element of the PA structures, with some 30% of the overall budget going to the security forces and, for comparison, only 0.1% to the agricultural sector. Thus, no surprise that the chant of the people on Sunday as they were beaten, as if to drown out the screaming, was “Yusqot, yusqot hukum il-'askiri” (“Down with the military regime.”) The echoes of the now world famous chant of the Arab Spring “il-sh'ab, yurid, isqaat il-nizaam” (“the people demand the downfall of the regime”) are clear. The violence of the PA police over the last two days has laid bare the inherently oppressive nature of a police and intelligence regime that seeks to control the political path of a people living under brutal occupation. It needs no reminding that the violence and corruption of the police has been the spark, and the added fuel, for the revolutions of the Arab world, with armed defenders of the status quo becoming symbols of the great injustices of society.

Of course the usually poor, often young police officers on the street are not the architects of this injustice, nor necessarily benefitting from it. However, they are the ones who violently beat and torture unarmed Palestinian civilians. They are the ones who implement the policies that violate our freedom of protest, assembly and expression in a climate where the decisions made in the PA corridors of power are always more removed from the needs and demands of the people. The invitation of Mofaz was a provocation to every Palestinian but unfortunately nothing more than a symptom of a much bigger problem the Palestinian people has to urgently address. The reaction of our youth, their steadfastness and determination gives us hope that a new generation is ready to take a leading part in the difficult and delicate task of building towards a new political horizon.

Tuesday, July 3rd, saw in the streets of Ramallah the third demonstration in a row that had been called by the youth. While Saturday's demonstration was aimed to protest the invitation to Ramallah extended by the PNA to Shaul Mofaz, Israeli vice-prime minister and war criminal, Sunday's protest was a reaction to the violent repression […] 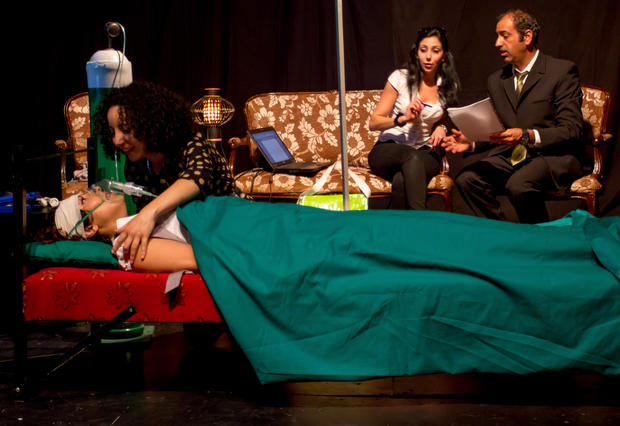 A political talk show sets the stage for House of Yasmine (“Beit Yasmine” in Arabic), a play produced in collaboration between the Ashtar Theatre of Ramallah and the Al-Harah Theatre of Jerusalem. The story unfolds as the play’s characters, led by human rights worker Yasmine, discuss the Palestinian Authority’s 2011 bid for statehood at the United Nations and then turn to audience members to ask for […]