Stop the Wall has sent an urgent complaint to UN Special Rapporteurs and diplomatic missions urging them to further investigate the Israeli repression of human rights defenders and to make 2012 the year in which they finally hold Israel accountable for these and other crimes. There is a clear pattern of escalation of Israeli repression developing and we call the international community to urgently take effective measures. 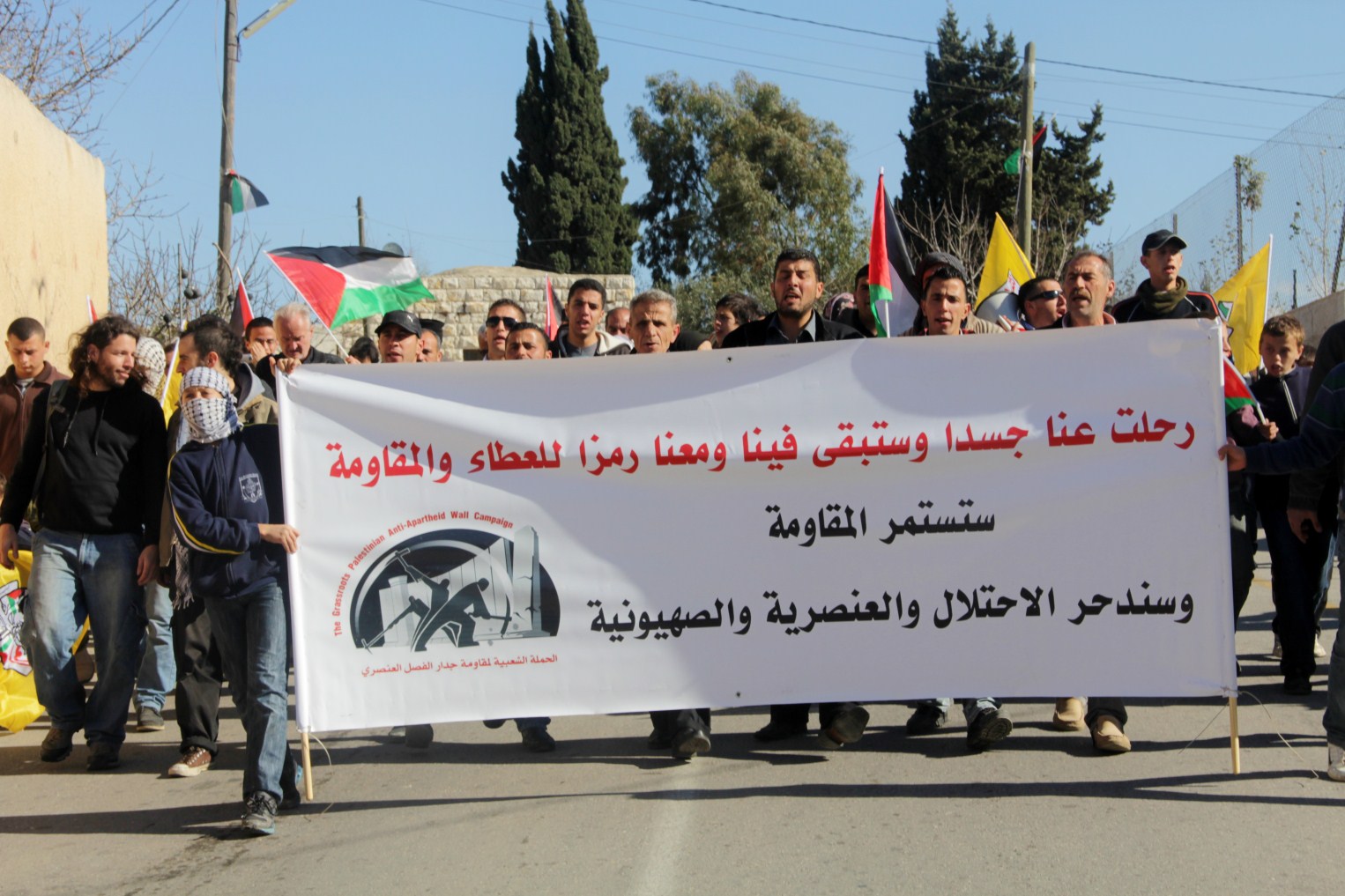 The complaints come after the shooting of another youth in Nabi Saleh, exactly two weeks of the assassination of Mustafa Tamimi in the same village. The 20-year old youth has been shot in cold blood by Israeli snipers with a 0.22 caliber round in his  thigh.  Eyewitnesses from the village report that they noticed two soldiers advancing alone towards the protesting crowd. One staying a behind the other. When they were between 10 to 15 meters from the protestors the soldier in the back took out a pistol, aimed it at the youth and shot him in the leg, close to the femoral artery.

This premeditated shooting has been confirmed by the Israeli military in a statement given to Jerusalem Post where a spokesperson states that the youth “was previously known to security forces and was specifically targeted”[1], allegedly for having thrown stones.

Stop the Wall denounces this shooting as a further grave breach of international law and Palestinian human rights and adds:  “We are pleased to see the Israeli military officially acknowledging what Stop the Wall has arguing throughout. Israeli repression of Palestinian protests – including the injury and the killings of activists – are premeditated and targeted. They are by no means aimed at ‘crowd control’ but at targeting the most active human rights defenders and depriving individuals and entire communities from their fundamental civil and human rights, including their right to life.”

In fact, Friday’s shooting of a young civilian was clearly premeditated, in no way justifiable as “self-defense” and clearly disproportional. Even under Israeli regulations the 0.22 caliber rounds from Rugers rifles have been banned for “crowd control” purposes[2], 0.22 pistols have been used in executions in the mafia and criminal world [3]. The premeditated use of disproportionate force against unarmed civilians in non life-threatening conditions is a war crime. 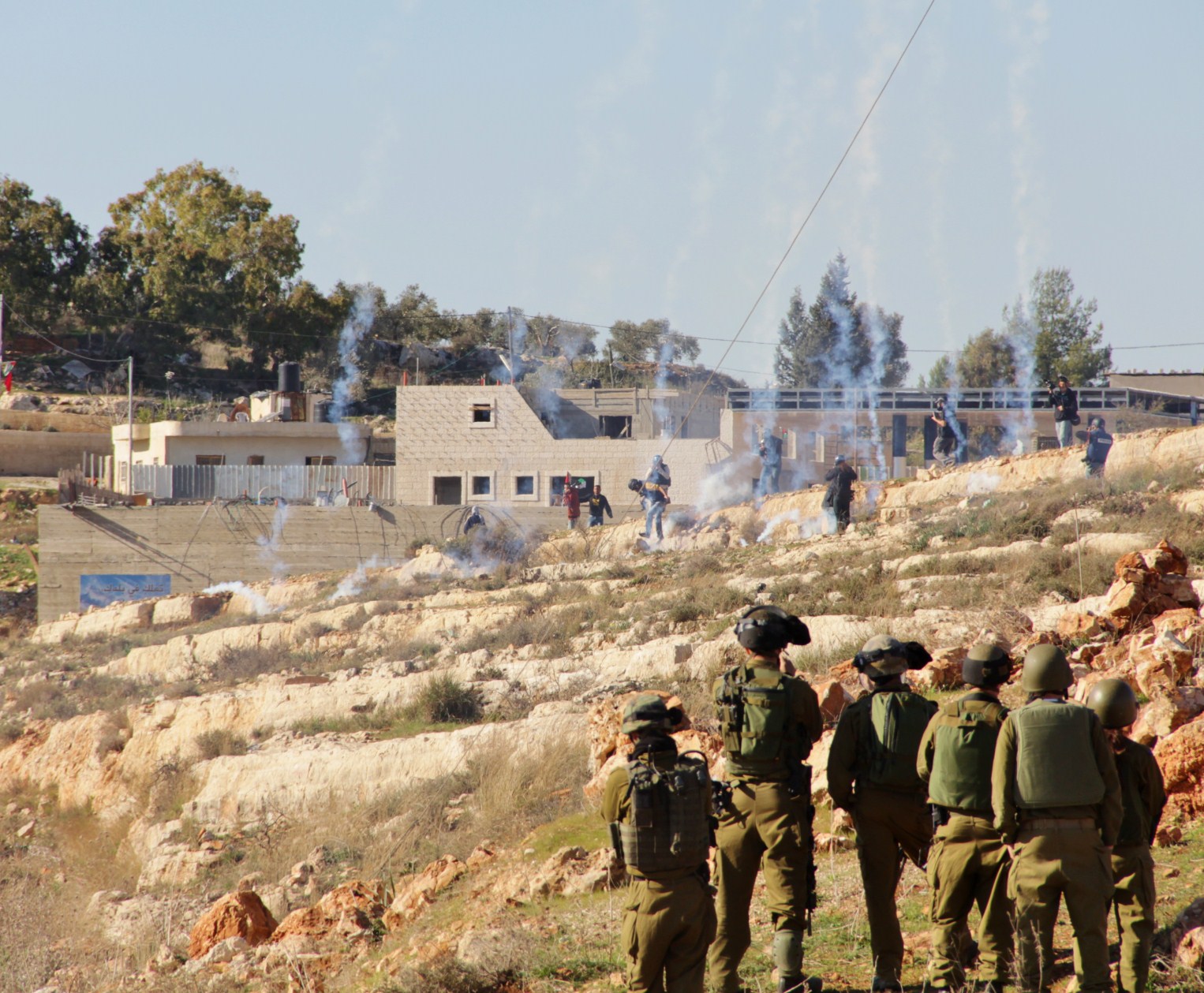 The Israeli repression of activists and human rights protests takes a myriad of forms and almost invariably adds to the theft of land, resources and livelihoods Palestinian communities affected by the Wall are suffering from. [4]

The popular committee of Nabi Saleh has declared that: “The occupation forces are trying to kill the popular resistance by their brutal repression, which reached to the point of killing Mustafa al-Tamimi two weeks ago. We accuse the soldiers of preparing to assassinate another person. It seems  that the soldiers insist on killing and injuring peaceful demonstrators by shooting live ammunition, tear gas canisters and rubber bullets directly and from close range at the crowd. We call upon our community to continue the struggle against the occupation and to participate in larger and wider numbers in the popular resistance. We further call for national unity and cohesion in front of all attempts to kill our determination and to disperse our ranks.”

Nabi Saleh is particularly targeted by the Israeli military[5]. Two weeks ago, the Israeli military has killed in the same village Mustafa Tamimi, a 28-year old member of the community, while the UN Special Rapporteur on Freedom of opinion and expression was in the village to hear the testimonies of the people. Mustafa died on December 10 – Human Rights Day – of wounds sustained after the Israeli occupation forces shot him in the face on Friday at the weekly popular protest in Nabi Saleh. Tamimi was shot from less than 10-meters distance with a high velocity tear gas grenade that made him unconscious and bleeding profusely. He was then taken to hospital where he remained in life support until this morning. The Israeli occupation forces prevented his family from accompanying him.

[4] Nabi Saleh has a population of approximately 500 residents and is located 30 kilometers northeast of Ramallah. The Israeli colony of Halamish (also known as Neveh Tzuf) was established on lands belonging to the villages of Nabi Saleh and Deir Nidham in 1976. Halamish colony has continued to expand and steal more Palestinian land. In the summer of 2008, the Israeli colonists from Halamish seized control of a number springs, all of which were located on private Palestinian land belonging to residents of Nabi Saleh. In December 2009, the village began weekly demonstrations in opposition to the illegal Israeli colony of Halamish annexing of the fresh water springs and stealing of more of the village’s land.

[5] Since Nabi Saleh began its demonstrations, the Israeli occupation forces has brutally sought to repress the protests, arresting more than 13% of the village, including children. In total, some 90 village residents have been arrested. All but three were tried for participating in the demonstrations. Of those imprisoned, 29 have been minors under the age of 18 years and 4 have been women.